Here are the slides from my presentation at the MacAD.UK Conference earlier this week:

Thanks to the organisers for the invitation and for the hospitality shown. It was a fine event.

Of course, my presentation didn’t even last 24 hours before needing updating. The biggest need for an update dropped around the time I was flying back home. So, here’s my addendum:

In Greg Neagle’s presentation, he provided specific definitions of kinds of imaging, which aligned with what I called “Group 2” definitions in my presentation. So here’s an update to my chart on how people define Thin Imaging (and, by extension, Modular Imaging): 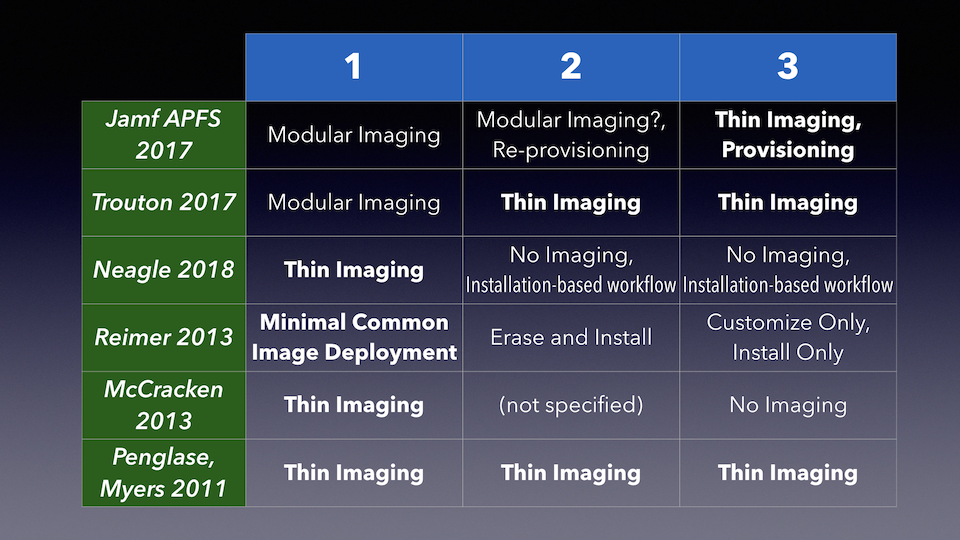 Imaging is Not Quite Dead

If you follow the link to the Apple Support article called “Upgrade macOS on a Mac at your institution” that I included in my presentation, you’ll notice that the published date has been changed from 2017 December 04 to either 2018 February 22 or 23. If you were lucky enough to see the February 22 version, it had a lot of changes. I’m going to assume that there was some truth in that article, even though Apple has now reverted the article to its previous wording (the only change being the publication date). Here’s what I saw:

It’s impossible to say right now why Apple pulled the article. There were some nice improvements in wording, setting aside the forward-looking references to macOS 10.13.4 (Spring 2018). In an Apple presentation I saw last November, they were stating that Fusion and Hard Disk boot volumes will be converted to APFS in a future macOS High Sierra update. My bet is that these two things are tied together. Maybe the features mentioned are not ready for 10.13.4. Maybe an Apple staffer just pushed a support article update into public view too early. Regardless of the reason, I’m going to treat the content of the pulled article as mostly true; it added a little bit of clarity to the original support article and Apple can change features at any time, so we can’t predict what will be in the final release of 10.13.4 or 10.13.5. It does appear, however, that imaging is not quite dead.